The Problem with Pro-Inclusion but Not Anti-Segregation

The Problem with Pro-Inclusion but Not Anti-Segregation 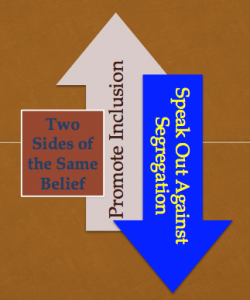 I recently gave a speech at a conference, and afterwards was approached by an individual who had a pointed criticism of my talk. “I support your message of inclusion, but why do you have to argue against facilities? Most of us work in these places. They will eventually change and workshops and day programs will just disappear if we do a good job with inclusion.”
His point was that we can change things without negativity. We don’t need to highlight the problems, just highlight the better solutions. And once we start getting people jobs, better homes, and more community support, more traditional programs will evolve. Agencies will no longer need or use facilities. He concluded his argument, saying that worrying about facilities just takes up too much energy and disrupts the field.
So, can inclusion of people with disabilities be promoted without fighting to end existing segregation?
Sadly, no. And the evidence against “waiting for evolution” is persuasive.
First, think about other social movements. Consider the long struggle for racial equality. Nearly 150 years of effort has demonstrated you cannot obtain civil rights without acting to end segregation. You cannot leave people in their isolated homes, schools, workplaces, and busses, and as we offer opportunities, hope the old paradigms will fade away. They didn’t and they don’t. It took legislation, civil disobedience, media exposés, demonstrations and more to get closer to inclusion. It took active work against segregation.
It is really no different in any social movement, including the disability field. For instance, the number of institutional residents with intellectual disabilities has declined steadily the last fifty years, but nearly all of this is due to class-action lawsuits. In other disability service areas, segregation actually seems to be increasing. Recent studies have shown steady gains in the use of facility-based work. Also, “non-work” programs have increased dramatically. Despite increases in supported living and employment in terms of pure numbers, the percentage of inclusive programs relative to all services haven’t gained at all in the last 15 years, and the gap seems to be widening.
A great illustration of this is supported employment. Segregation has not “evolved away” in vocational services despite 30 years of job placement success of people previously considered unemployable. Serious change will require (yes, require, as in limiting choice) phasing out common practices of today, including sub-minimum wage, facility-services, group employment models, congregate housing, institutionalization, and other obsolete models.
I think muting criticism of facility-based services is exactly the wrong thing to do, painful as it is to hear. We don’t have to belittle agencies or the people who work there. They work hard and are dedicated to their jobs. But we must continue to forcefully speak out against the continued needless segregation of those with disabilities. Too many people verbalize how they are “pro-inclusion,” but then they do nothing to act on segregated programs and practices within their own agencies.
It’s not enough, for example, to say you want “Employment First,” without also pointing out the workshops must eventually close. Social change also does require demonstrating a better path and not just griping about what’s wrong. But it also must include criticizing ineffective practices that are not working to evolve, and speaking out for justice when it isn’t given. Let’s stop wasting people’s lives now, while waiting for some future fantasy evolution to come. Make change happen today.
By daledileo|2017-05-18T15:43:03-04:00January 28th, 2013|conversion, segregation|11 Comments