Low Productivity: More of An Excuse than Obstacle to Real Work

Low Productivity: More of An Excuse than Obstacle to Real Work 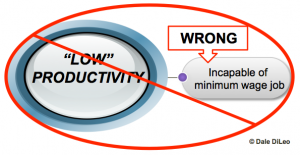 Several issues reside in the heated discussions over the need to change the traditional day service model for people with disabilities. But the defining one relates to competing beliefs about productivity:

Can individuals with the most significant disabilities be productive in the workplace, such that sub-minimum wage is unnecessary?

Those in the individualized community employment sector, myself included, believe yes. We use a zero-exclusion model, reject sub-minimum wage (referred to as 14(c), its legislative shorthand), and no group employment. Looking at various US national databases, these efforts represent probably only about 15% of people with developmental disabilities receiving day services.
Those providers in the much larger majority, the traditional day service sector, utilize segregated work centers and sub-minimum wage, and often rely on group employment models such as enclaves or crews. Yet, the functional levels of those they serve do not appear different from those in individualized community employment.
It appears that the loudest argument against ending 14c sub-minimum wage has been that its removal will take away employment opportunities for those with the most severe challenges. For example, on this blog, commenters talk about how, without a workshop or sub-minimum wage, their son or daughter would be left with little to do. And professional lobbyists for agencies providing more traditional services make the same case. In a recent In These Times article, reporter Mike Elk noted that even leading congressional disability advocate Sen. Tom Harkin will not pursue ending sub-minimum wage, stating that he “has heard from a number of advocates for people with disabilities that eliminating the sub-minimum wage option without having a real plan to create sustainable employment alternatives would be detrimental to Americans with disabilities currently working in 14(c) settings.”
In reality, there is a real plan that has been around for over 30 years. It’s called supported employment. And eliminating 14(c) does not completely reflect what advocates have actually proposed, which is eventually eliminating it by phasing it out. The article then notes a key source of the position of retaining sub-minimum wage was Harkin’s former top disability staffer who now works as a lobbyist for ACCSES, a coalition of providers. He is quoted as saying:
Examine these statements carefully. What does 30% productivity mean? Where did it come from? As demonstrated in a workshop? On what tasks? With what support? Is this rate set in stone? How reliable is this a predictor of job success in the community?

A number like that put on a person is damaging; it is just an arbitrary label like any other stereotype.

The assertion that removing sub-minimum wage will lead to job loss is not only unproven, but false. This is demonstrated by the many workers across the US with very challenging disabilities who are working at minimum wage or better, yet whose productivity ratings in traditional (segregated) work training settings were extremely low. It also sets up a false choice (i.e., low paid work or none at all). This kind of thinking is only true if you have a narrow (and I would argue obsolete) view of job placement, productivity, and what people are capable of. 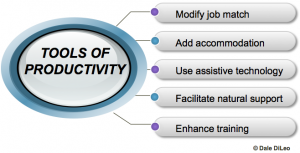 Here is the missing piece: The best predictor of job success is not whether we can convince employers to let people work at lower standards for lower wages; it is how well we customize employment and provide job supports to meet productivity demands. It is inherently unfair to close perceived productivity gaps by reducing the wages of those who need money the most, especially when we have other proven tools to enhance productivity.

Essentially, human service agencies have relied on sub-minimum wage as an entry tool to access jobs (or keep people “busy” in workshops) in situations that are probably not well-matched nor sufficiently supported or accommodated to enhance good productivity. While it might be somewhat understandable, given the pressure on providers to met job goals, it is a poor solution to the chronic history of unemployment of those with disabilities. With better training and using existing job customization tools, sub-minimum wage is not necessary.

The continuing use of sub-minimum wage is actually hindering our ability to promote and provide well-matched employment. It has become an obstacle, first because of its misuse (the ongoing documentation of many instances of low wage exploitation alone should cause it to end). And secondly, because it has caused providers to rely on a “low cost” plea for job placement, rather than investing in the real task of developing the skills job developers need to produce a more productive job situation.

There are likely many, who after reading this, will still not agree, thinking such job matches and supports such as I describe are unrealistic for most. Note that such customized employment is indeed already being accomplished in many places. In a future blog, I will to try to explain more about how to individualize jobs such that productivity can be reached to justify commensurate wages.

Productivity, at first glance, seems to be just a matter of how fast you do what is given to you. But dig deeper, and you see that is more about how well the worker is matched and supported to accomplish something needing to be done. And the answer on succeeding in that, though challenging, is up to the provider’s abilities at customizing, accommodating, carving, training, and more.

Lobbyists for day programs hanging on to sub-minimum wage as an answer for their belief about those “not capable of work” need to rethink the message they are giving. “He has 30% productivity” is no better than any other discriminatory disability stereotype, and it flies in the face of federal law where there is a presumption of employability. And it’s a damn shame that Senator Harkin has accepted it as fact.